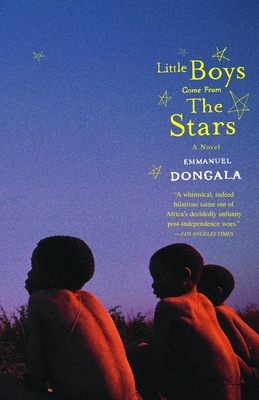 Sometimes sweet, sometimes sardonic story told by a precious boy from an unnamed country in Africa. Very funny and sharp.

Sardonic, subtle, and sweetly scathing, Little Boys Come from the Stars is satire at its best. Set in an unnamed country in equatorial Africa, it tells the story of Michel, a precocious teen dubbed Matapari (“trouble”) because of his extraordinary birth. Though his father is a reclusive scholar, his mother a pious though confused Catholic, and his uncle a shameless opportunist determined to gain power in the shifting politics of their post-colonial nation, Matapari remains an unsullied child who wears Reeboks, drinks Coke, reads Japanese comics, and watches Rambo. But when his family becomes the nucleus of the revolution for democracy, Matapari proves to be the ideal narrator for this story of violent upheaval and bloody corruption–a voice whose ironic innocence makes bearable and even humorous the awful realities of the world it describes.

Emmanuel Dongala was dean of Brazzaville University in the Congo Republic until he fled the country’s civil war in 1997. He lives in western Massachusetts and teaches at Simon’s Rock of Bard College.

“A funny, touching novel that offers a child’s perspective on power and politics.” –Chicago Tribune

This feature require that you enable JavaScript in your browser.
END_OF_DOCUMENT_TOKEN_TO_BE_REPLACED

This feature require that you enable JavaScript in your browser.
END_OF_DOCUMENT_TOKEN_TO_BE_REPLACED

This feature require that you enable JavaScript in your browser.
END_OF_DOCUMENT_TOKEN_TO_BE_REPLACED