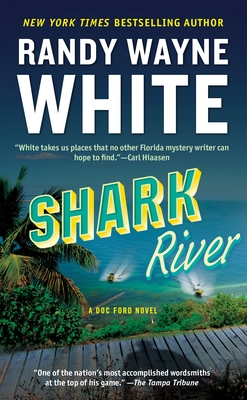 This is book number 8 in the A Doc Ford Novel series.

The past comes disconcertingly alive for Doc Ford, in a series that continues to grow in popularity and acclaim.

Randy Wayne White's Ten Thousand Islands was "one of the most satisfying thrillers in recent memory" wrote the Chicago Tribune, and the starred review in Publishers Weekly said, "Of all the writers [in] the Florida mayhem boom, only White can claim to have created a series hero to match Hemingway's memorable outdoorsmen and John D. MacDonald's much-missed Travis McGee." And now White has created his most electrifying novel yet.

On a working vacation to Guava Key, marine biologist Doc Ford notices two female joggers who follow the same route at the same time every day. He can't help thinking how easy it would be for a predator to become aware of them, too. As it turns out, he isn't the only one. There seem to be more and more predators these days.

Forced to step in, Ford finds himself involved in a story of intrigue and revenge that becomes more dangerous with every turn-and some of them hit pretty close to home. Add to that a Bahamian relative he never knew he had, a letter leading to a treasure that may or may not exist, and some past history that becomes very alarmingly present, and his life has suddenly become very complicated. Not to mention the prospect of his death. . . .

Filled with crackling power and atmosphere, and some of the best suspense characters in fiction, Shark River is a triumph of storytelling.

Randy Wayne White is the author of seventeen previous Doc Ford novels and four collections of nonfiction. He lives in an old house built on an Indian mound in Pineland, Florida.

This feature require that you enable JavaScript in your browser.
END_OF_DOCUMENT_TOKEN_TO_BE_REPLACED

This feature require that you enable JavaScript in your browser.
END_OF_DOCUMENT_TOKEN_TO_BE_REPLACED

This feature require that you enable JavaScript in your browser.
END_OF_DOCUMENT_TOKEN_TO_BE_REPLACED