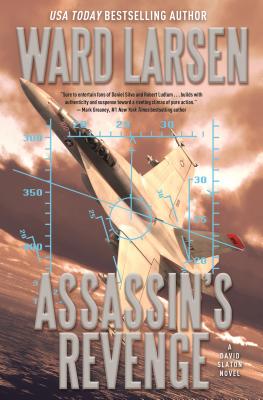 This is book number 5 in the David Slaton series.

Ward is one of our own Sarasota residents. Enjoy his first rate thriller!

On a sunny dock in Gibraltar, Slaton returns to the sailboat he shares with his wife and young son to find them missing. The only clue to their whereabouts is a cryptic message: If he wants to see them again, he must eliminate an obscure scientist working for the International Atomic Energy Agency. Slaton races to Vienna to unravel the scheme.

Half a world away, a small team of ISIS operatives arrives in North Korea. It is comprised of two suicidal jihadists, one technician, and the caliphate’s only officer with naval experience. Their mission: to reestablish the group’s relevance by undertaking a shocking strike against America.

From Europe to North Korea to the Pacific Ocean, Slaton finds himself entangled in a deadly nuclear game. Working against him are a band of suicidal terrorists, supported by a North Korean government that is about to implode. That slate of actors, however, face something even more lethal.

A devoted father and husband—one who happens to be the perfect assassin.

WARD LARSEN is a USA Today bestselling author and three-time winner of the Florida Book Award. His work has been nominated for both the Edgar and Macavity Awards. A former US Air Force fighter pilot, Larsen flew more than twenty missions in Operation Desert Storm. He also served as a federal law enforcement officer and is a trained aircraft accident investigator. Look for Amber Entertainment's film adaptation of Larsen's first thriller, The Perfect Assassin.

Praise for the David Slaton Novels

“A must-read for anyone looking for the next great assassin saga.” —Kirkus Reviews on Assassin’s Game

“A stunning thriller, one that ranks right up there with Day of the Jackal. Frankly, this is the best nail-biting suspense novel I’ve read in years.” —Stephen Coonts, New York Times bestselling author of The Art of War, on Assassin’s Game

“Sharp as a dagger and swiftas a sudden blow, Assassin’s Game is a first-rate thriller with a plot that grabs you hard and won’t let go.” —Ralph Peters, New York Times bestselling author, on Assassin’s Game

This feature require that you enable JavaScript in your browser.
END_OF_DOCUMENT_TOKEN_TO_BE_REPLACED

This feature require that you enable JavaScript in your browser.
END_OF_DOCUMENT_TOKEN_TO_BE_REPLACED

This feature require that you enable JavaScript in your browser.
END_OF_DOCUMENT_TOKEN_TO_BE_REPLACED