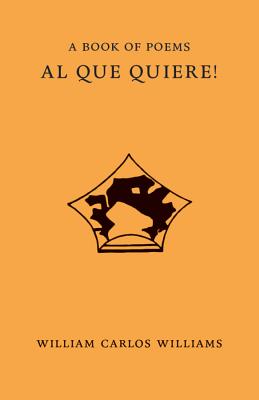 The centennial edition of William Carlos Williams’s early ground-breaking volume, containing some of his best-loved poems

Published in 1917 by The Four Seas Press, Al Que Quiere! was William Carlos Williams’s breakthrough book and contains some of his best-loved poems (“Tract,” “Apology,” “El Hombre,” “Danse Russe,” “January Morning,” and “Smell!”), as well as a Whitmanesque concluding long poem, “The Wanderer,” that anticipates his epic masterpiece Paterson. Al Que Quiere! is the culmination of an experimental period for Williams that included his translations from Spanish. The Spanish epigraph of Al Que Quiere! is from the short story “El hombre que parecía un caballo” (“The Man Who Resembled a Horse”), by the Guatemalan author Rafael Arévalo Martínez. This centennial edition contains Williams’s translation of the story, as well as his commentary from a book of conversations, I Wanted to Write a Poem, on the individual poems of Al Que Quiere!

Besides being a practicing physician, William Carlos Williams (1883–1963) was a poet, short-story writer, novelist, translator, playwright, and essayist whose contribution to the development of modern American poetry grew out of his commitment to recording the "local" experience of Rutherford, New Jersey, and its environs.

Jonathan Cohen is a poet, translator, and essayist. He is the editor and translator of Pluriverse: New and Selected Poems, by Ernesto Cardenal, and the editor of By Word of Mouth: Poems from the Spanish, 1916-1959, by William Carlos Williams (both published by New Directions).

For all his roughness there remains with me the conviction that there is nothing meaningless in his book, Al Que Quiere!, not a line.

It seems clear that Williams is the twentieth-century poet who has done most
to influence our very conception of what poetry should do, and how much it
does not need to do.

It is ever more apparent that Williams is this century’s major American poet.

This feature require that you enable JavaScript in your browser.
END_OF_DOCUMENT_TOKEN_TO_BE_REPLACED

This feature require that you enable JavaScript in your browser.
END_OF_DOCUMENT_TOKEN_TO_BE_REPLACED

This feature require that you enable JavaScript in your browser.
END_OF_DOCUMENT_TOKEN_TO_BE_REPLACED