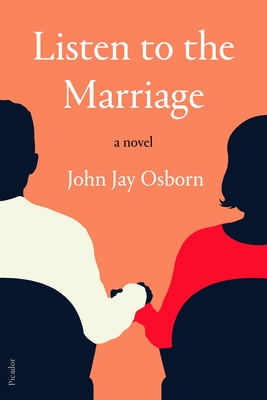 A fascinating inside look at what goes on in a marriage counseling session. Suspensful in not knowing if the marriage will be "salvaged."

A riveting drama of marital therapy

Gretchen and Steve have been married for a long time. Living in San Francisco, recently separated, with two children and demanding jobs, they’ve started going to a marriage counselor. Unfolding over the course of ten months and taking place entirely in the marriage counselor’s office, John Jay Osborn’s Listen to the Marriage is the story of a fractured couple in a moment of crisis, and of the person who tries to get them to see each other again. A searing look at the obstacles we put in our own way, as well as the forces that drive us apart (and those that bring us together), Listen to the Marriage is a poignant exploration of marriage—heartbreaking and tender.

John Jay Osborn graduated from Harvard Law School in 1970. He wrote the bestseller The Paper Chase while he was a full-time law student; the book was adapted into a film (for which John Houseman won an Oscar for Best Supporting Actor), and an award-winning television series.

Osborn has clerked for the United States Court of Appeals, practiced law in New York City, taught at the University of Miami School of Law, and practiced in the estate-planning field, as well as giving advice and representation to artists and writers. He is the author of several novels and has written episodes for a variety of television shows. Since 1991 he has been a lecturer at the law school of the University of San Francisco.

“[Listen to the Marriage] is a slim yet immersive story.” —Jessica Zack, San Francisco Chronicle

“A beneficial read for any couple in a long-term relationship or marriage. The blush of the honeymoon may be long over, and despite hurt and pain—or if there is none—this novel can be a guide to discover if their partnership is viable or to help strengthen it.” —Nancy Carty Lepri, New York Journal of Books

“Excellent . . . Readers with relationship experience will find here the realistic issues of compromise, sacrifice, communication and also much that is new in terms of how to nurture a relationship . . . Deeply engaging and insightful, [Listen to the Marriage] is enthusiastically recommended for anyone who has ever been (or wishes to be) married.” —Patrick Sullivan, Library Journal

“A nuanced portrait of what makes a marriage work . . . It takes dedication, self-reflection, and lots and lots of communication . . . Emotionally intelligent and deeply felt.” —Publishers Weekly

“This surprisingly dramatic, voyeuristic novel is based in part on the author’s own experiences, lending it an intimate, authentic feel.” —Good Housekeeping

“Listen to the Marriage shows Osborn is . . . able to home in on the heart of a story and reveal its characters’ motivations . . . The novel is a page-turner, with the reader thrust into the characters’ most vulnerable moments . . . Osborn’s tale focuses on a single relationship, and in doing so, examines the power of empathy and invites readers to consider how they relate to others in their own lives.” —Carla Jean Whitley, BookPage

“[A] slim, swift-reading novel . . . The book’s page-turning drama . . . is driven by a race: Will the characters learn enough in time to stay together?” —Lou Fancher, The Mercury News

This feature require that you enable JavaScript in your browser.
END_OF_DOCUMENT_TOKEN_TO_BE_REPLACED

This feature require that you enable JavaScript in your browser.
END_OF_DOCUMENT_TOKEN_TO_BE_REPLACED

This feature require that you enable JavaScript in your browser.
END_OF_DOCUMENT_TOKEN_TO_BE_REPLACED