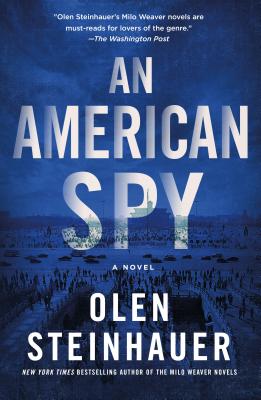 This is book number 3 in the Milo Weaver series.

“Olen Steinhauer’s Milo Weaver novels are must-reads for lovers of the genre.” —The Washington Post

With An American Spy, Steinhauer delivers a searing international thriller that will settle once and for all who is pulling the strings and who is being played.

In the bestseller The Tourist, reluctant CIA agent Milo Weaver uncovered a conspiracy linking the Chinese government to the highest reaches of the American intelligence community, including his own Department of Tourism—the most clandestine department in the Company. The shocking blowback arrived in the Hammett Award-winning The Nearest Exit when the Department of Tourism was almost completely wiped out as the result of an even more insidious plot.

Now, with only a handful of “tourists”—CIA-trained assassins—left, Weaver would like to use this opportunity to return to a normal life, a life focused on his family. But his former CIA boss, Alan Drummond, can’t let the job go. When Alan uses one of Milo’s compromised aliases to travel to London and then disappears, calling all kinds of attention to his actions, Milo has no choice but to go in search of him. Worse still, it's beginning to look as if Tourism's enemies are gearing up for a final, fatal blow.

Praise for An American Spy

“Not since le Carré has a writer so vividly evoked the multilayered, multifaceted, deeply paranoid world of espionage, in which identities and allegiances are malleable and ever shifting, the mirrors of loyalty and betrayal reflecting one another to infinity . . . Intensely clever.” —The New York Times Book Review

“This ambitious, complex story spans the globe. Even when the intricacies of its plot are most challenging, we are fascinated and swept forward.” —The Washington Post

“Stunning . . . Readers are irresistibly drawn into Weaver's dogged struggle to unravel a complicated game of cat and mouse . . . Steinhauer is at the top of his game—but when isn't he?” —USA Today

This feature require that you enable JavaScript in your browser.
END_OF_DOCUMENT_TOKEN_TO_BE_REPLACED

This feature require that you enable JavaScript in your browser.
END_OF_DOCUMENT_TOKEN_TO_BE_REPLACED

This feature require that you enable JavaScript in your browser.
END_OF_DOCUMENT_TOKEN_TO_BE_REPLACED