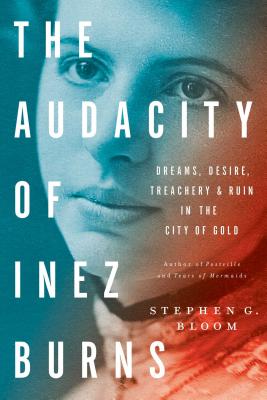 As a woman, this book is a well done story about a time when women "suffered" abortions, etc. I believe that while times have changed, women still struggle on many levels.

THE VIVID, SCANDAL-FILLED STORY OF A SHREWD, RAGS-TO-RICHES MILLIONAIRESS AND THE RUTHLESS POLITICIAN WHO PURSUED HER, TOLD AGAINST THE EFFERVESCENT BACKDROP OF AMERICA’S GOLDEN CITY—SAN FRANCISCO.

San Francisco, until the mid-1940s, was a city that lived by its own rules, fast and loose. Formed by the gold rush and destroyed by the 1906 earthquake, it served as a pleasure palace for the legions of men who sought their fortunes in the California foothills. For the women who followed, their only choice was to support, serve, or submit.

Inez Burns was different. She put everyone to shame with her dazzling, calculated, stone-cold ambition.

Born in the slums of San Francisco to a cigar-rolling alcoholic, Inez transformed herself into one of California’s richest women, becoming a notorious powerbroker, grand dame, and iconoclast. A stunning beauty with perfumed charm, she rose from manicurist to murderess to millionaire, seducing one man after another, bearing children out of wedlock, and bribing politicians and cops along the way to secure her place in the San Francisco firmament.

Inez ruled with incandescent flair. She owned five hundred hats and a closet full of furs, had two small toes surgically removed to fit into stylish high heels, and had two ribs excised to accentuate her hourglass figure. Her presence was defined by couture dresses from Paris, red-carpet strutting at the San Francisco Opera, and a black Pierce-Arrow that delivered her everywhere. She threw outrageous parties on her sprawling, eight-hundred-acre horse ranch, a compound with servants, cooks, horse groomers, and trainers, where politicians, judges, attorneys, Hollywood moguls, and entertainers gamboled over silver fizzes.

Inez was adored by the desperate women who sought her out—and loathed by the power-hungry men who plotted to destroy her.

During a time when women risked their lives with predatory practitioners lurking in back alleys, Inez and her team of women, clad in crisp, white nurse’s uniforms, worked night and day in her elegantly appointed clinic, performing fifty thousand of the safest, most hygienic abortions available during a time when even the richest wives, Hollywood stars, and mistresses had few options when they found themselves with an unwanted pregnancy.

Inez’s illegal business bestowed upon her power and influence—until a determined politician by the name of Edmund G. (Pat) Brown—the father of current California Governor Jerry Brown—used Inez to catapult his nascent career to national prominence.

In The Audacity of Inez Burns, Stephen G. Bloom, the author of the bestselling Postville, reveals a jagged slice of lost American history. From Inez’s riveting tale of glamour and tragedy, he has created a brilliant, compulsively readable portrait of an unforgettable woman during a moment when America’s pendulum swung from compassion to criminality by punishing those who permitted women to control their own destinies.

Stephen G. Bloom is an award-winning journalist and author of four critically acclaimed nonfiction books. He has been a staff writer for the Los Angeles Times, San Jose Mercury News, and a senior writer in San Francisco for the Sacramento Bee. Bloom’s work has appeared in many magazines, newspapers, and websites, including Smithsonian, The New York Times Magazine, Chicago Tribune Magazine, Washington Post, International Herald Tribune, London Guardian, Salon, Best New Writing 2016, National Public Radio, and The Atlantic. He is a professor of journalism at the University of Iowa.

"In his latest book, Bloom . . . chronicles the life and exploits of Inez Burns (1886-1976), a flamboyant, unapologetic libertine who rose to prominence as the most notorious abortionist in California in the first half of the 20th century. Born in San Francisco to a hardscrabble, no-nonsense mother and an alcoholic father, Burns refused the limited life options available to women of the era. Taken under the wing of a charming suitor who also happened to be an abortionist, she learned how to perform the procedure herself. Before long, she opened her own facility and became the most in-demand abortion provider in California as well as a major player in San Francisco's underworld. Eventually, her success provoked the ire of up-and-coming district attorney Pat Brown. His attempts to bring her down are at the heart of the narrative in the form of an engaging courtroom drama. Bloom's San Francisco is almost a character in itself, as he provides a rich history of the city as well as insight into the changing tides of 20th-century culture, especially regarding nascent feminism and the struggle for reproductive rights. While Burns possessed many traits worthy of admiration, she was not without a dark side, and Bloom's portrait is by no means that of a saint, despite his sympathy for his subject. The author's prose is breezy and conversational, and his subject is controversial enough to make the book read more like a thriller than an academic biography, despite the breadth of scholarship on display. The book is less engaging when Bloom strays from his main subject to report on the large cast of supporting characters. Thankfully, the author seems to understand this, and he keeps the spotlight shining squarely on the mercurial Burns. Bloom rescues an important figure from the dustbin of history. Burns receives the storyteller she deserves and can now occupy her proper place in the intersectional histories of feminism, law, and the San Francisco underworld." —Kirkus

"The real-world story that historians don't dare—or can't—write, with a fascinating and flamboyant character who throws new light on women's struggles in America. Inez's epic battle with the father of the current governor of California sums up perfectly a century of social change." —James Bone, author of The New York Times bestseller The Curse of Beauty

"The Audacity of Inez Burns is the astonishing story of an important and lost figure of history—one whose daring, skill, and compassion served countless women of her time, and saved them, too. This riveting account of Burns' hardscrabble rise to power and wealth, and the smug forces of righteousness that conspired to bring her down, is a vivid illustration of how our past haunts the present. A timely and provocative portrait." —Kate Manning, author of My Notorious Life

"The Audacity of Inez Burns is a don't-miss read. It chronicles the rise and fall of a remarkable woman, both fierce and fearless, who built a highly professional and highly illegal abortion services empire in early 20th century California. But it also chronicles her eventual collision with rise of California itself and its ambitious and newly powerful politicians. The result is a richly detailed and intensely human story, conflicted and completely compelling." —Deborah Blum, Pulitzer Prize–winning author of The Poisoner's Handbook

"Bloom’s exhaustive new biography is cinematic in scope as well as feel; each turn of the page reveals another finely-wrought revelation or flummoxing plot twist. Inez Burns with her Titian hair and killer curves was born to be a movie star, but in the end, she lived a life far too big, bad, and brash for the silver screen. The book reads like a love letter to not only the irrepressible Mrs. Burns, but to the city of San Francisco itself, with special attention lavished upon the gilded excess and savage grotesqueries of its lawless prewar years. There is blood, yes, as well as plenty of corrupt politicians, Mafia dons, botched procedures, glittering jewels, and murder, all backlit against the rolling fog and bohemian spirit that continues to define the city to this day." —The Outline

"Bloom tells a captivating story of Burns’ ascent, presented alongside San Francisco’s breathtaking transformation in the first decades of the 20th century . . . a breathless tale of a woman’s rise . . ." —San Francisco Chronicle

This feature require that you enable JavaScript in your browser.
END_OF_DOCUMENT_TOKEN_TO_BE_REPLACED

This feature require that you enable JavaScript in your browser.
END_OF_DOCUMENT_TOKEN_TO_BE_REPLACED

This feature require that you enable JavaScript in your browser.
END_OF_DOCUMENT_TOKEN_TO_BE_REPLACED