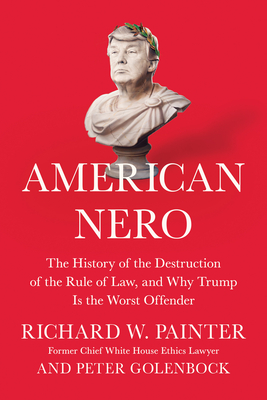 Richard Painter, a Republican, worked in the George W. Bush Administration as associate counsel to the President in the White House Counsel's office from February 2005 to July of 2007. His specialties are government ethics, business ethics, and lawyers' ethics. Since Donald Trump began his run for the presidency in 2016, Painter has been an outspoken critic of candidate Trump and President Trump, appearing frequently on such popular cable news stations as CNN and MSNBC. The author of two books, he has also appeared on NPR's All Things Considered and recently was a guest on The Bill Maher Show. Norman Eisen, President Barack Obama's ethics chief, described Painter as "the Number 1 scholar in the country on government ethics." Painter, like the President, has a dedicated and faithful Twitter following. Peter Golenbock, a graduate of NYU Law School, has written 65 books, ten of which have been New York Times bestsellers. In addition to his best sellers about sports and with sports figures, he has also written Presumed Guilty with Jose Baez, the attorney for Casey Anthony, The Chairman, written with Jim Greer, the chairman of the Republican Party of Florida, and In The Country of Brooklyn, a book about the liberal strain emanating from there.

This feature require that you enable JavaScript in your browser.
END_OF_DOCUMENT_TOKEN_TO_BE_REPLACED

This feature require that you enable JavaScript in your browser.
END_OF_DOCUMENT_TOKEN_TO_BE_REPLACED

This feature require that you enable JavaScript in your browser.
END_OF_DOCUMENT_TOKEN_TO_BE_REPLACED